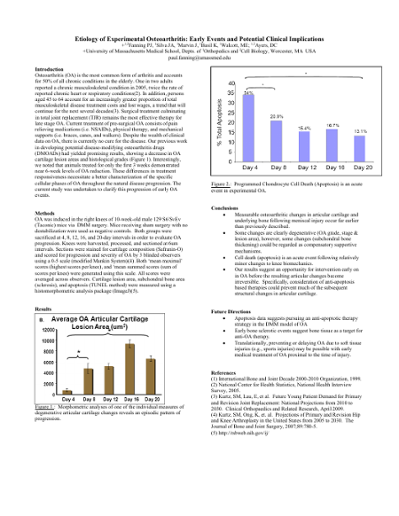 Introduction Osteoarthritis (OA) is the most common form of arthritis and accounts for 50% of all chronic conditions in the elderly. One in two adults reported a chronic musculoskeletal condition in 2005, twice the rate of reported chronic heart or respiratory conditions(2). In addition, persons aged 45 to 64 account for an increasingly greater proportion of total musculoskeletal disease treatment costs and lost wages, a trend that will continue for the next several decades(3). Surgical treatment culminating in total joint replacement (TJR) remains the most effective therapy for late stage OA. Current treatment of pre-surgical OA consists of pain relieving medications (i.e. NSAIDs), physical therapy, and mechanical supports (i.e. braces, canes, and walkers). Despite the wealth of clinical data on OA, there is currently no cure for the disease. Our previous work in developing potential disease-modifying osteoarthritis drugs (DMOADs) had yielded promising results, showing a decrease in OA cartilage lesion areas and histological grades (Figure 1). Interestingly, we noted that animals treated for only the first 3 weeks demonstrated near 6-week levels of OA reduction. These differences in treatment responsiveness necessitate a better characterization of the specific cellular phases of OA throughout the natural disease progression. The current study was undertaken to clarify this progression of early OA events. Methods OA was induced in the right knees of 10-week-old male 129 S6/SvEv (Taconic) mice via DMM surgery. Mice receiving sham surgery with no destabilization were used as negative controls. Both groups were sacrificed at 4, 8, 12, 16, and 20-day intervals in order to evaluate OA progression. Knees were harvested, processed, and sectioned at 6um intervals. Sections were stained for cartilage composition (Safranin-O) and scored for progression and severity of OA by 3 blinded observers using a 0-5 scale (modified Mankin System)(4). Both ‘mean maximal’ scores (highest scores per knee), and ‘mean summed scores (sum of scores per knee) were generated using this scale. All scores were averaged across observers. Cartilage lesion area, subchondral bone area (sclerosis), and apoptosis (TUNEL method) were measured using a histomorphometric analysis package (ImageJ)(5). Conclusions Measurable osteoarthritic changes in articular cartilage and underlying bone following meniscal injury occur far earlier than previously described. Some changes are clearly degenerative (OA grade, stage & lesion area), however, some changes (subchondral bone thickening) could be regarded as compensatory supportive mechanisms. Cell death (apoptosis) is an acute event following relatively minor changes to knee biomechanics. Our results suggest an opportunity for intervention early on in OA before the resulting articular changes become irreversible. Specifically, consideration of anti-apoptosis based therapies could prevent much of the subsequent structural changes in articular cartilage. Future Directions Apoptosis data suggests pursuing an anti-apoptotic therapy strategy in the DMM model of OA Early bone sclerotic events suggest bone tissue as a target for anti-OA therapy. Translationally, preventing or delaying OA due to soft tissue injuries (e.g., sports injuries) may be possible with early medical treatment of OA proximal to the time of injury. References (1) International Bone and Joint Decade 2000-2010 Organization, 1999. (2) National Center for Health Statistics, National Health Interview Survey, 2005. (3) Kurtz, SM, Lau, E, et al. Future Young Patient Demand for Primary and Revision Joint Replacement: National Projections from 2010 to 2030. Clinical Orthopaedics and Related Research, April 2009. (4) Kurtz, SM, Ong, K, et. al. Projections of Primary and Revision Hip and Knee Arthroplasty in the United States from 2005 to 2030. The Journal of Bone and Joint Surgery, 2007;89:780-5. (5) http://rsbweb.nih.gov/ij/

Except where otherwise noted, this item's license is described as Copyright the Author(s)