The Roles of DNA Mismatch Repair and Recombination in Drug Resistance: A Dissertation 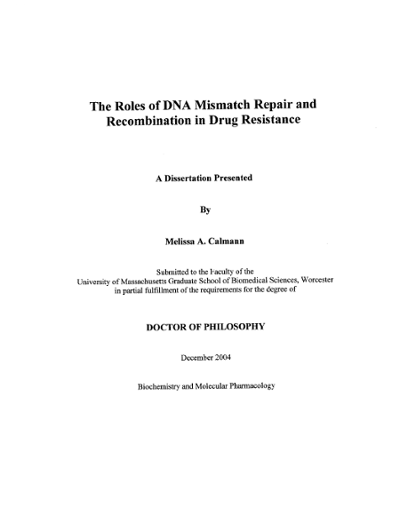 Cells have evolved different pathways in order to tolerate damage produced by different cytotoxic agents. Each agent reacts differently with DNA causing formation of different types of adducts, each eliciting the SOS stress response to induce different cellular repair pathways. One such type of substrate generated by cytotoxic agents is the DNA double strand break (DSB). The main pathway to repair such damage in the cell is through a process of recombination. In this thesis, I specifically examined the anti-cancer therapeutic agent cisplatin, which forms single- and double-strand breaks in DNA, and methylating agents, which are proposed to also be capable of forming such breaks. Neither type of agent can directly form these breaks; however, they leave a signature type of damage lesion which is recognized by different repair processes. The mismatch repair (MMR) status of a mammalian cell or an Escherichia coli dam mutant relates directly to the sensitivity of the cells to the agents mentioned above. As the dam gene product plays an important role in this pathway and in other processes in the cell, when mutated, dam cells are more sensitive to methylating agents and cisplatin than wildtype. A combination of dam and either mutS or mutL restores resistance to the same agents to wild type levels. Therefore, mismatch repair sensitizes dam bacteria to these agents. The rationale for this comes from examining the viability of dam mutants, as dammutants are only viable because they are highly recombinogenic. The presence of MMR-induced nicks or gaps results in the formation of DSBs that require recombination to restore genomic integrity. Mismatch repair proteins inhibit recombination between homeologous DNA. Homeologous recombination (recombination between non-identical, but similar, DNA sequences) is only possible when the MMR proteins, MutS and MutL, are absent. It is postulated that this is because MutS recognizes the homeologous DNA and subsequently slows down or aborts recombination completely. The double mutant, dam mutS/L shows wild type levels of sensitivity to cisplatin because mismatch repair is no longer recognizing the adducts and recombinational repair is allowed to continue. Human cells behave in an analogous fashion to the bacterial dam mutant, showing sensitivity to cisplatin and methylating agents. When an additional mutation in a mismatch repair gene is present, the cells become as resistant as wild type. Therefore, the E. coli dammutant is a useful model system to study this mechanism of drug resistance. DNA containing cisplatin adducts or lesions resulting from methylation are substrates for other types of repair processes such as nucleotide excision repair and base excision repair; however they have also been implicated as substrates for MMR and recombinational repair. The goal of the work in this thesis was two-fold. The first was to identify the gene products and mechanism necessary for repair of cisplatin damage by recombination. The second was to examine the mechanism of cisplatin toxicity, and specifically how MMR proficiency aids in the cytotoxicity of this drug by preventing recombination. Using the duplicated inactive lac operon recombination assay, we were able to determine the requirements for spontaneous and cisplatin-induced recombination, the RecBCD and RecFOR pathways. We were also able to further postulate that the cisplatin- induced signature damage recognized by recombination was the double strand break, likely formed from fork stalling and regression or a subsequent collapse during DNA synthesis, thus requiring these pathways for repair. This observation led to the experiments involving examination of the mechanism of cisplatin toxicity and where MMR could inhibit specific steps of recombination with DNA containing cisplatin lesions. Low levels of cisplatin lesions slowed the rate of RecA-mediated strand transfer in vitro, likely due to its ability to form a large bend in the DNA. MutS bound to cisplatin lesions in the DNA during heteroduplex formation in the RecA strand exchange step of recombination, inhibiting branch migration, and aborting the reaction. In order for MutS to inhibit recombination with cisplatin lesions, the results in the work in Chapter IV, show that binding to the lesion requires the C-terminus of MutS to be present, possibly due to a requirement for tetramerization of the protein, a domain contained in the C-terminus of MutS. This antirecombination function is different than the mutation avoidance function of MutS, as binding of mismatches requires only dimers. This differential sensitivity for cisplatin versus a mismatch was further exemplified in Chapter V, the experiments with dna mutants, where the greatest difference in sensitivity was observed for a dnaE mutant (catalytic subunit of polIII), which was as sensitive to cisplatin as a dam mutant, but fairly resistant to treatment with MNNG. This is indicative of the potency of a cisplatin adduct to block polymerase progression, versus a mismatch which poses little problem to synthesis. Recombination is invoked to repair DSBs caused by the cisplatin lesions through the RecBCD and FOR pathways after fork regression or collapse. A main conclusion from these studies is that a cisplatin lesion is processed differently than a mismatch. The mechanism of how a cisplatin lesion is processed, forming the DSB which invokes recombinational repair is still unclear and continues to be investigated.