Mechanisms of Establishment and Maintenance of RNA Virus Persistence in Primary Lymphocytes: a Dissertation 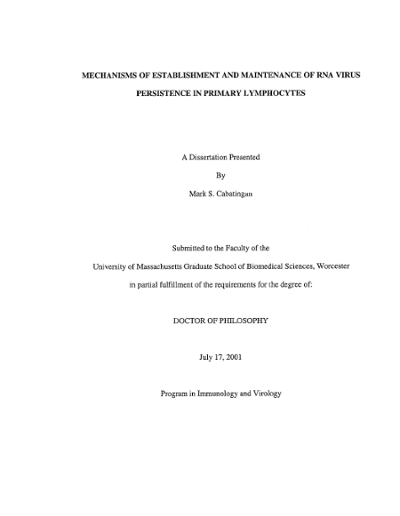 RNA virus persistence in lymphocytes has been studied extensively in vitro, but the influence of lymphocyte homeostatic mechanisms and antiviral immunity on persistence has not been well studied in an in vivo system. It is demonstrated here that vesicular stomatitis virus (VSV), a negative-strand RNA virus, is maintained in B lymphocytes in vivo despite the existence of homeostatic mechanisms that drive the cells to proliferate under conditions of B cell deficiency and a strong antibody response to the virus. It is also shown that antiviral antibodies inhibit VSV reactivation from persistently infected primary B cells in vitro. A model is proposed for virus persistence in vivo in which B cell homeostatic signals drive virus expression in some infected cells, resulting in an antibody response, which maintains virus persistence in B cells. In the course of conducting experiments to define the homeostatic signals that might act on persistently infected B cells in vivo, it was found that a fraction of small, resting splenic B cells proliferates after adoptive transfer into B cell deficient hosts (sublethally irradiated, xid, or SCID). This process, termed homeostatic proliferation, is driven by B cell deficiency since proliferation is limited in B cell sufficient hosts. This reveals the existence of a mechanism by which B cells sense their own numbers. The proliferation is unique in that the replicating cells do not upregulate cell surface markers, such as CD25 and B7-2, associated with antigen or mitogen induced proliferation. They do, however, show transient increases in other activation markers (CD69, CD71), demonstrating the action of an inductive signal. Homeostatic proliferation is a property of both mature and immature B cells, but in competition experiments, only mature B cells inhibit proliferation. xid B cells express a defective form of Bruton's tyrosine kinase (Btk); as a result, these cells proliferate poorly in response to stimulation through a number of cell surface receptors including the BCR, IL-5R, IL-10R, the toll-like receptor RP-105, and CD38. Homeostatic proliferation is severely reduced in xid B cells; thus, this process is regulated by a Btk-dependent inductive signal, which is counterbalanced by an inhibitory signal provided by mature B cells. B cell homeostatic proliferation does not rely on transcription factors (c-rel and p50) critical for conventional proliferation induced by antigen or mitogen (c-rel), or for peripheral B cell survival (p50), suggesting that multiple signals drive this process and that survival and proliferation signals are not identical. VSV persists in small, resting primary B cells for several weeks in vitro, and virus replication is restricted at multiple levels depending on the activation state of the cells. After adoptive transfer of infected B cells into B cell deficient (xid) recipients, viral RNA, but not infectious particles, can be detected by RT-PCR in recipient spleens for at least 72 days. RT-PCR analysis of FACS sorted donor cells stained with CFSE reveals that viral RNA is maintained in transferred B cells but can also found in recipient cells. Infected B cells can undergo homeostatic proliferation and an antibody response is generated to the virus, suggesting that homeostatic signals induce virus expression in some transferred cells. Virus persistence is maintained despite an active immune response to the virus. In fact, persistence may be maintained by antiviral antibody since in vitro treatment of infected primary B cells with anti-VSV antibody inhibits virus reactivation at multiple levels (transcription, protein synthesis, assembly/release of infectious particles). This inhibition is reversible upon antibody removal, demonstrating that functional virus is maintained in antibody treated cells. Antibody specific for a single viral protein (VSV G) is sufficient since inhibition is mediated by monoclonal antibodies specific for a VSV G; neutralizing activity is not required because inhibition occurs with non-neutralizing monoclonal antibodies to VSV G. It is proposed that antibody binding to VSV G on infected B cells generates inhibitory signal(s) that suppress signaling pathways required for virus replication in B cells. Finally, a model of RNA virus persistence in B cells is proposed in which lymphocyte homeostatic signals promote virus expression, leading to the production of antiviral antibodies, which suppress virus replication inside infected B cells and help to maintain persistence.

Copyright is held by the author, with all rights reserved.