Characterization of the Relationship Between Measles Virus Fusion, Receptor Binding, and the Virus-Specific Interaction Between the Hemagglutinin and Fusion Glycoproteins: a Dissertation 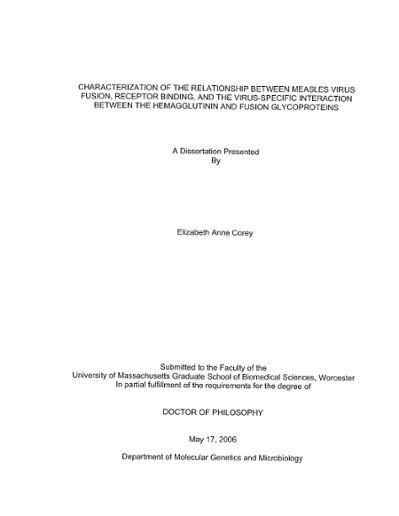 Measles (MV) virions, like those of other enveloped viruses, enter cells by fusing their lipid membranes with those of the target host cells. Additionally, infected tissues often possess giant multinucleate cells, known as syncytia, which are formed by fusion of infected cells with uninfected neighbors. Expression of both the MV attachment (H) and fusion (F) proteins is required for membrane fusion. MV H mediates receptor binding in order to bring the two membranes into close proximity prior to F activation and is thought to trigger F activation through a specific interaction between the two proteins. Although measles H and F are efficiently transported to the cell surface when expressed independently, evidence has been reported in support of an intracellular interaction between the two proteins that can be detected using an ER co-retention approach. However, it was not determined if the putative co-retention was specific to the two measles glycoproteins, as is their ability to complement each other for efficient fusion promotion. Thus, in this thesis, the formation of an intracellular complex between MV H and F was re-examined. Consistent with the formation of an intracellular complex, cell surface expression and receptor binding of untagged wt MV H is slightly reduced by co-expression of an excess of ER-tagged MV F compared to co-expression with wt F. However, the reduction in surface expression is non-specific in that it can also be induced with heterologous proteins of NDV, which lack significant homology with those of MV. Although this approach did not detect a specific intracellular interaction between MV H and F, it cannot be ruled out that there is a weak association of the proteins that is undetectable by this method. This led to the use of an alternative approach to investigate the cellular site(s) of interaction between the measles H and F proteins. Consistent with a cell surface interaction between MV H and F, the combination of surface biotinylation and co-immunoprecipitation detects formation of a virus-specific H-F complex. Approximately, 21% of the total amount of MV H at the cell surface can be captured with MV F using an antibody against the latter protein. Two complementary approaches were used to address the relationship between this cell surface interaction and receptor recognition by MV H. First, the proteins were co-immunoprecipitated from the surface of Chinese hamster ovary (CHO) cells, which do not express either MV receptor, CD46 or CD150. Similar levels of MV H can be co-immunoprecipitated with F from the surfaces of parental CHO cells and stably transfected cells that express, human CD46 (CHO-CD46), indicating that binding to CD46 is not the trigger for the H-F interaction. Second, MV H proteins, carrying mutations that dramatically reduce CD46 binding, were shown to co-immunoprecipitate efficiently with F from the surface of HeLa cells. Significantly, these results indicate that MV H and F interact in the absence of, and thus prior to, receptor binding. This is in direct contrast to the NDV HN-F cell surface interaction, which is thought to be triggered by receptor binding. Identification of the domains of the para myxovirus attachment and fusion proteins that mediate membrane fusion activities is an essential part of understanding the mechanism of fusion. As a result of the H-F interaction prior to receptor binding, MV H attachment to its cellular receptor must result in conformational changes that trigger activation of the F protein. Site-directed mutagenesis analyses of two regions of MV H indicate that a HR domain in the stalk of the attachment protein is essential to the ability of H to activate F. However, either it is not the only region of H that interacts with F or it is indirectly involved in F activation because mutations in the HR do not disrupt MV H-F complex formation at the cell surface. Additionally, the functional interaction between MV H and F may be mediated, at least in part, by Loop 1 of the amino terminus of the C-rich region of the fusion protein. However, the exact role of this region of the F protein in fusion promotion remains to be determined. Importantly, the cell surface interaction between MV H and F proteins appears to be mediated by more that one region of each protein. In contrast to NDV, in no case has a definitive link between any single amino acid difference in MV H or F and an inability to form the cell surface H-F complex been established. In conclusion, the data presented in this dissertation support a model of measles membrane fusion in which the Hand F proteins form a complex prior to receptor recognition. This complex may hold F in its meta-stable pre-fusion state until binding of H to receptors at the cell surface triggers dissociation of the complex, releasing F to assume its fusogenic form. Importantly, these data also indicate that, although paramyxoviruses may all use the same general process. for promotion of membrane fusion, the mechanism may vary in multiple aspects. A more complete understanding of the means by which measles promotes membrane fusion may direct the development of specific strategies aimed at interfering with the early stages of infection.