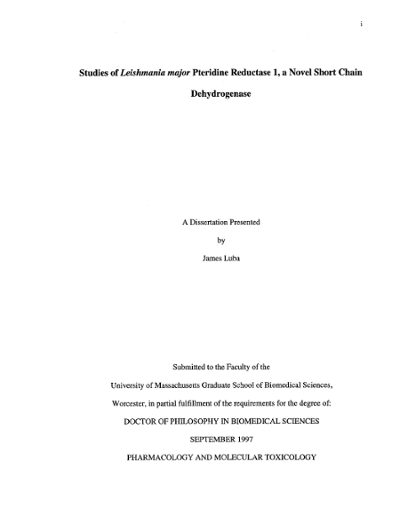 Pteridine reductase 1 (PTR1) is an NADPH dependent reductase that catalyzes the reduction of several pterins and folates. The gene encoding this enzyme was originally identified in Leishmania based on its ability to provide resistance to the drug methotrexate (MTX). The DNA and amino acid sequences are known, and overproducing strains of Escherichia coli are available. PTR1 has been previously shown to be required for the salvage of oxidized pteridines (folate, biopterin, and others). Since Leishmaniaare folate and pterin auxotrophes, PTR1 is a possible target for novel anti-folate drugs for the treatment of leishmaniasis. PTR1 catalyzes the transfer of hydride from NADPH to the 2-amino-4-oxo-pteridine ring system yielding 7, 8-dihydropteridines, and to the pteridine ring system of 7, 8-dihydropteridines yielding 5,6, 7, 8-tetrahydropteridines. PTR1 shows a pH dependent substrate specificity. At pH 4.6 the specific activity of PTR1 is highest with pterins, while at pH 6.0 the specific activity of PTR1 was highest with folates. The sequence of PTR1 is only 20-30% homologous to the sequences of members of the short chain dehydrogenase/reductase enzyme family. Although this is typical for members of this enzyme family, it does not allow for unambiguous classification in this family. In fact, when the DNA sequence of PTR1was first determined, PTR1 was classified as an aldoketo reductase. To classify PTR1 definitively, further biochemical characterization was required. To provide this information, the work described here was undertaken: (i) the stereochemical and kinetic course of PTR1 was determined; (ii) residues important in catalysis and ligand binding were identified; and (iii) conditions for the crystallization of PTR1 were developed. The stereochemistry of hydride transfer The use of [3H]-folate, showed that the ultimate product of PTR1 was 5, 6, 7, 8-tetrahydrofolate. 4R-[3H]-NADPH and 4S-[3H]-NADPH were synthesized enzymatically and used as the cofactor for the reduction of folate. PTR1 was coupled to thymidylate synthase (TS), and tritium from 4S-[3H]-NADPH was transferred to thymidylate. Therefore, the pro-S hydride of NADPH was transferred to the si face of dihydrofolate (DHF; see figure I-1). The transfer of the pro-Shydride indicates that PTR1 is a B-side dehydrogenase which is consistent with its membership in the short chain dehydrogenase (SDR) family. The kinetic mechanism of PTR1 When NADPH was varied at several fixed concentrations of folate (and vice-versa) V/K (Vmax/KM) showed a dependence upon concentration of the fixed substrate. This is consistent with a ternary complex mechanism, in contrast to a substituted enzyme mechanism that exhibits no dependence of V/K on fixed substrate. Product inhibition patterns using NADP+ and 5-deazatetrahydrofolate (5dTHF, a stable product analog) were consistent with an ordered ternary complex mechanism in which NADPH binds first and NADP+ dissociates last. However, an enzyme-DHF binary complex was detected by fluorescence. Isotope partitioning experiments showed that the enzyme-DHF binary complex was not catalytically competent whereas the enzyme-NADPH complex was. Measurement of the tritium isotope effect on V/K (T(V/K)) at high and low dihydrofolate confirmed that PTR1 proceeds via a steady state ordered mechanism. Rapid quench analysis showed that dihydrofolate was a transient intermediate during the reduction of folate to tetrahydrofolate and that folate reduction is biphasic. Catalytic Residues of PTR1 The amino acid sequences of dihydropteridine reductase and 3-α, 20-β, hydroxy steroid dehydrogenase were aligned to that of PTR1. Based on the results of the alignment, site directed mutagenesis was used to investigate the role of specific residues in the catalytic cycle of PTR1. Variant enzymes were screened based on their ability to rescue a dihydrofolate reductase (DHFR) deficient strain of E. coli. Selected PTR1 variants (some complementing and some non-complementing) were purified and further characterized. Tyrosine 193 of the wild type enzyme was found to be involved in the reduction of pteridines, but not in the reduction of 7, 8-dihydropteridines, and eliminated the substrate inhibition of 7, 8-dihydropteridines observed with the wild type enzyme. Both PTR1(K197Q) and PTR1(Y193F/K197Q) had decreased activity for all substrates and low affinity for NADPH. In contrast to the wild type enzyme, NADPH displayed substrate inhibition towards PTR1(K197Q). All PTR1(D180) variants that were purified were inactive except for PTR1(D180C), which showed 2.5% of wild type activity with DHF. The binary complexes of PTR1(D180A) and PTR1(D180S) with NADPH showed a decrease in affinity for folate. Based on the kinetic properties of the PTR1 variants, roles for Y193, K197, and D180 are proposed. In conjunction with D180, Y193 acts as a proton donor to N8 of folate. K197 forms hydrogen bonds with NADPH in the active site and lowers the pKaof Y193. D180 participates in the protonation of N8 of folate and N5 of DHF. Crystallization of PTR1 and PTR1-ligand complexes The crystallization of PTR1 from L. major and L. tarentolea as unliganded and as binary and ternary complexes was attempted. Several crystal forms were obtained including L. major PTR1-NADPH-MTX crystals that diffracted to ~ 3.2 Å resolution. It was not possible to collect a full data set of any of the crystals. At their current stage, none of the crystal forms is suitable for structural work.