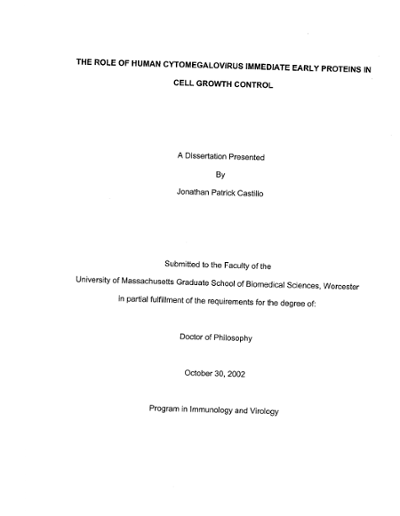 The proper maintenance of the pathways governing cell growth is critical to ensure cell survival and DNA fidelity. Much of our understanding of how the cell cycle is regulated comes from studies examining the relationship between DNA viruses and the mechanisms of cell proliferation control. There are numerous examples demonstrating that viruses can alter the host cell environment to their advantage. In particular, the small DNA tumor viruses, which include adenovirus, simian-virus 40 (SV-40), and human papillomavirus (HPV), can modulate the host cell cycle to facilitate viral DNA replication. Due to the fact that these viruses infect quiescent, non-cycling cells and lack the necessary enzymes and resources to replicate their DNA (e.g. DNA polymerase), the small DNA tumor viruses must activate the host cell replication machinery in order to expedite viral DNA replication. The capacity of these viruses to perturb normal cell proliferation control is dependent upon their oncogene products, which target p53 and members of the Retinoblastoma (RB) family of proteins and inactivate their respective functions. By targeting these key cell cycle regulatory proteins, the small DNA tumor viruses induce the infected host cells to enter S-phase and activate the components involved with host cell DNA synthesis thereby generating an environment that is conducive to viral DNA replication. In contrast, the larger, nuclear-replicating DNA viruses such as those from the family Herpesviridae, do not share the same stringent requirement as the small DNA viruses to induce the infected host cell to enter S-phase. The herpesviruses encode many of the components to stimulate nucleotide biosynthesis and the necessary factors to facilitate virus DNA replication including a viral DNA polymerase and other accessory factors. Additionally, many herpesviruses encode gene products that arrest the host cell cycle, in most instances, prior to the G1/S transition point. Inducing cells to growth arrest appears to be a prerequisite for the replication of most herpesviruses. However, in addition to encoding factors that inhibit the cell cycle, many herpesviruses encode proteins that can promote cell cycle progression in a manner similar to the small DNA tumor virus oncoproteins. By targeting members of the RB family and p53 protein, the herpesvirus proteins induce S-phase and activate S-phase associated factors that playa role in DNA replication. In this manner, the herpesviruses may promote an environment that is favorable for DNA replication. Consistent with the other herpesviruses, human cytomegalovirus (HCMV)induces human fibroblasts to growth arrest. However, in other cell types, virus infection causes cells to enter S-phase. In addition, HCMV replication requires several cellular factors that are present only during S-phase. Furthermore, HCMV induces the activation of S-phase-associated events as well as the increased expression of numerous S-phase genes following infection. HCMV encodes two immediate early (IE) gene products, IE1-72 and IE2-86, which can interact with members of the RB family of proteins. Additionally, the IE2-86 protein can bind to and inhibit p53 protein function. Given the functional resemblance between the HCMV IE proteins and the oncoproteins of the small DNA tumor viruses, we hypothesized that expression of the HCMV IE proteins could modulate cell cycle control. Specifically, we determined that expression of either IE1-72 or IE2-86 can induce quiescent cells to enter S-phase and delay cell cycle exit following serum withdrawal. Moreover, IE2-86 mediates this effect in the presence or absence of p53, whereas IE1-72 fails to do so in p53-expressing cells. Furthermore, both IE1-72 and IE2-86 induce p53 protein accumulation that is nuclear localized. Because IE1-72 fails to promote S-phase entry in cells expressing p53 and induces p53 protein levels, the mechanism by which IE1-72 alters p53 levels was examined. IE1-72 elevates p53 protein levels by inducing both p19ARF protein and an ATM-dependent phosphorylation of p53 at Ser15. IE1-72 also promotes p53 nuclear accumulation by abrogating p53 nuclear shuttling. As consequence of this IE1-72-mediated increase in p53 levels, p21 protein is induced leading to a p21-dependent growth arrest in cells expressing IE1-72. These findings demonstrate that the HCMV IE proteins can alter cell proliferation control and provide further support to the notion that HCMV, through the expression of its IE proteins, induces S-phase and factors associated with S-phase while blocking cell DNA synthesis, to possibly generate an environment that is suitable for viral DNA replication.

Some images are not clear. Please see print version.