The Role of Inducible T Cell Kinase (Itk) in the Development of Innate T Cells and in the Formation of Protective Memory Responses: A Dissertation 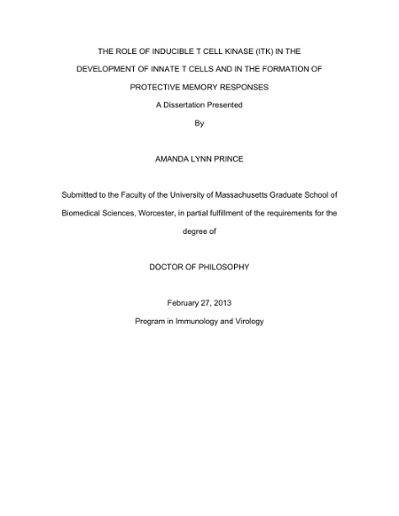 T cell development in the thymus produces multiple lineages of cells, including conventional naïve CD4+ and CD8+ T cells, regulatory T cells, and innate T cells. Innate T cells encompass γδ T cells, invariant natural killer (iNKT) cells, mucosal-associated invariant T (MAIT) cells, and H2-M3-restricted cells (Berg, 2007). Although they are a minor subset of all thymocytes, innate T cells develop in the thymus and share characteristics of the innate and adaptive immune systems (Berg, 2007). These lymphocytes undergo antigen receptor rearrangement and are able to exert their effector function immediately upon ex vivo stimulation (Berg, 2007). However, in several strains of mice harboring mutations in T cell signaling proteins or transcriptional regulators, conventional CD8+ T cells develop as innate cells that share characteristics with memory T cells (Atherly et al., 2006b; Broussard et al., 2006; Fukuyama et al., 2009; Gordon et al., 2011; Verykokakis et al., 2010b; Weinreich et al., 2010). One of these signaling proteins, inducible T cell kinase (Itk) is a nonreceptor protein tyrosine kinase that signals downstream of the T cell receptor (TCR) (Berg et al., 2005). Upon TCR activation, Itk is activated and recruited to the TCR signaling complex, where Itk interacts with Src homology 2 (SH2) domain-containing leukocyte phosphoprotein of 76 kDa (SLP-76), linker for activation of T cells (LAT), and phospholipase C γ1 (PLCγ1) (Berg et al., 2005). Thus, in Itk-deficient mice, TCR signaling is disrupted, which results in mature CD4- CD8+ (CD8SP) thymocytes that are CD44high, CD62Lhigh, CD122+, and CXCR3+ and that express high levels of the transcription factor, Eomesodermin (Eomes) (Atherly et al., 2006b; Broussard et al., 2006; Weinreich et al., 2010). Recently, it was determined that the development of these innate CD8SP thymocytes in itk-/- mice is dependent on IL-4 produced in the thymic environment by a poorly characterized subset of CD3+ thymocytes expressing the transcriptional regulator, promyelocytic leukemia zinc finger (PLZF) (Gordon et al., 2011; Verykokakis et al., 2010b; Weinreich et al., 2010). Here we show that a sizeable proportion of mature CD4+ CD8- (CD4SP) thymocytes in itk-/- mice also develop as Eomesodermin+ innate T cells. These Eomes+ innate CD4+ T cells are CD44high, CD62Lhigh, CD122+, and CXCR3+ (Atherly et al., 2006b; Broussard et al., 2006; Dubois et al., 2006; Weinreich et al., 2010). Surprisingly, neither CD4SP nor CD8SP innate thymocytes in itk-/- mice are dependent on γδ T cells for their development as was previously hypothesized (Alonzo and Sant'Angelo, 2011). Instead, both subsets of innate itk-/- T cells require the presence of a novel PLZF-expressing, SAP-dependent thymocyte population that is essential for the conversion of conventional CD4+ and CD8+ T cells into Eomesodermin-expressing innate T cells with a memory phenotype. This novel subset of PLZF-expressing SAP-dependent innate T cells preferentially home to the spleen and mesenteric lymph nodes and have a restricted TCR repertoire. Thus, we have christened this subset as CD4+ PLZF + MAIT-like cells. We have characterized multiple subsets of innate T cells that expand in the absence of Itk. Therefore, we were interested in how innate T cells respond to infection. Although Itk KO mice have defects in cytolytic function and cytokine production during an acute infection, these mice are able to clear viral infections (Atherly et al., 2006a; Bachmann et al., 1997). Hence, we hypothesized that Itk-deficient memory CD8+ T cells would be able to provide protection upon a challenge infection. Conversely, we found this not to be true although Itk-deficient memory CD8+ T cells were present in similar frequencies and cell numbers as WT memory CD8+ T cells at 42 days post-infection. Furthermore, Itk-deficient memory CD8+ T cells were able to produce IFNγ and exert cytolytic function upon stimulation. Although the function of Itk-deficient memory CD8+ T cells appeared to be intact, we found that these cells were unable to expand in response to a challenge infection. Remarkably, conventional memory CD8+ T cells lacking Itk were able to expand and form protective memory responses upon challenge. Thus, the inability of Eomes+ innate CD8+ T cells to form protective memory responses does not appear to be intrinsic to cells deficient in Itk. This thesis is divided into six major chapters. The first chapter will provide an introduction to T cell development and the role of Itk in T cell development. Additionally, it will introduce a variety of innate T cell subsets that will be discussed throughout this thesis and will provide an overview of CD4+ and CD8 + T cell differentiation during infection. This section will explain the role of Itk in CD4+ helper T cell differentiation and describe how Itk-deficient CD8+ T cells respond to acute infection. The introduction will also discuss the generation of conventional memory CD8+ T cells. The second chapter will provide the details of the experimental procedures used in this thesis. The third chapter will describe the characterization and development of Eomes+ innate CD4+ T cells that develop in the absence of Itk. Additionally, this chapter will address the subset of PLZF+ innate T cells that induce the expression of Eomes in innate T cells. The fourth chapter will further characterize and explore the development of itk-/- CD4+ PLZF+ MAIT-like T cells. The fifth chapter will examine the role of Eomes + innate CD8+ T cells in protective memory responses. Chapters three through five will display work that is in preparation to be submitted to a peer-reviewed journal. The sixth chapter will discuss the results of this thesis and their implications.