Dissecting the Role of a lncRNA and Involvement of <em>Plasmodium</em> Infections in the Innate Immune Response: A Dissertation 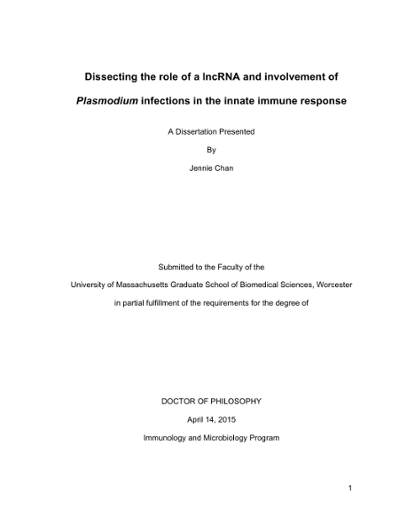 The innate immune system is a multicomponent response governed by intricate mechanisms of induction, regulation and resolution to elicit antimicrobial defenses. In recent years, the complexity of eukaryotic transcriptomes has become the subject of intense scrutiny and curiosity. It has been established, that RNA polymerase II (RNAPII) transcribes hundreds to thousands of long noncoding RNAs (lncRNAs), often in a stimulus and cell-type specific manner. However, the functional significance of these transcripts has been particularly controversial. While the number of identified lncRNAs is growing, our understanding of how lncRNAs themselves regulate other genes is quite limited. In chapter 2, a novel lncRNA is identified, more specifically, a natural antisense transcript, that mediates the transcription of the pro-inflammatory cytokine IL-1α. Through loss-of-function studies, I report the necessity of this transcript in mediating IL-1α mRNA expression by affecting RNAPII binding to the IL-1α promoter after toll-like receptor signaling. For the first time, I show that IL-1α is regulated at the transcriptional level. As a second independent component of this thesis, we explore the role of the innate immune response after infection by the malaria-causing parasite, Plasmodium berghei ANKA (PbA), and how innate immune components are both beneficial and detrimental to the host depending on when and where inflammation is triggered during infection. We attempt to identify the “malarial toxin” responsible for aberrations in the immune response that is detrimental for disease outcomes and the innate signaling pathways that are involved. Many pathogens induce pathological inflammatory conditions that lead to irreparable homeostatic imbalances and become fatal to the host. Here, type I Interferon signaling is required to dampen parasite load during liver-stage infections, but leads to host mobidity if these pathways are activated in the erythrocytic phase of infection. Together, this thesis provides new insights on how components of the innate immune system are regulated, and how dysregulation of immunity can potentially lead to adverse effects during active infections.