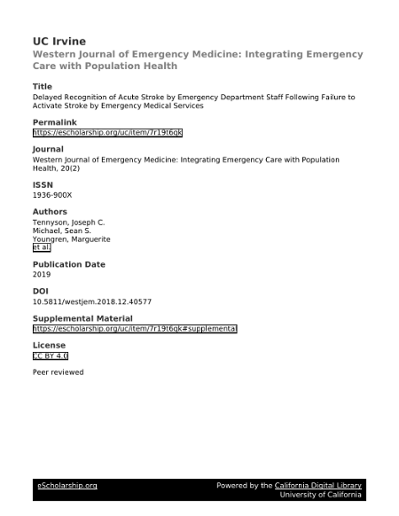 Introduction: Early recognition and pre-notification by emergency medical services (EMS) improves the timeliness of emergency department (ED) stroke care; however, little is known regarding the effects on care should EMS providers fail to pre-notify. We sought to determine if potential stroke patients transported by EMS, but for whom EMS did not provide pre-notification, suffer delays in ED door-to-stroke-team activation (DTA) as compared to the other available cohort of patients for whom the ED is not pre-notified-those arriving by private vehicle. Methods: We queried our prospective stroke registry to identify consecutive stroke team activation patients over 12 months and retrospectively reviewed the electronic health record for each patient to validate registry data and abstract other clinical and operational data. We compared patients arriving by private vehicle to those arriving by EMS without pre-notification, and we employed a multivariable, penalized regression model to assess the probability of meeting the national DTA goal of < /=15 minutes, controlling for a variety of clinical factors. Results: Our inclusion criteria were met by 200 patients. Overall performance of the regression model was excellent (area under the curve 0.929). Arrival via EMS without pre-notification, compared to arrival by private vehicle, was associated with an adjusted risk ratio of 0.55 (95% confidence interval, 0.27-0.96) for achieving DTA < /= 15 minutes. Conclusion: Our single-center data demonstrate that potential stroke patients arriving via EMS without pre-notification are less likely to meet the national DTA goal than patients arriving via other means. These data suggest a negative, unintended consequence of otherwise highly successful EMS efforts to improve stroke care, the root of which may be ED staff over-reliance on EMS for stroke recognition.

Link to Article in PubMed

Copyright: © 2019 Tennyson et al. This is an open access article distributed in accordance with the terms of the Creative Commons Attribution (CC BY 4.0) License. See: http://creativecommons.org/ licenses/by/4.0/

Except where otherwise noted, this item's license is described as Copyright: © 2019 Tennyson et al. This is an open access article distributed in accordance with the terms of the Creative Commons Attribution (CC BY 4.0) License. See: http://creativecommons.org/ licenses/by/4.0/