Improving Breastfeeding Outcomes at the Family Health Center of Worcester 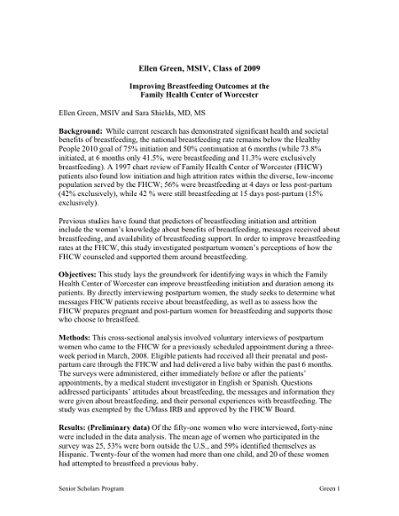 Background:While current research has demonstrated significant health and societal benefits of breastfeeding, the national breastfeeding rate remains below the Healthy People 2010 goal of 75% initiation and 50% continuation at 6 months (while 73.8% initiated, at 6 months only 41.5%, were breastfeeding and 11.3% were exclusively breastfeeding). A 1997 chart review of Family Health Center of Worcester (FHCW) patients also found low initiation and high attrition rates within the diverse, low-income population served by the FHCW; 56% were breastfeeding at 4 days or less post-partum (42% exclusively), while 42 % were still breastfeeding at 15 days post-partum (15% exclusively). Previous studies have found that predictors of breastfeeding initiation and attrition include the woman’s knowledge about benefits of breastfeeding, messages received about breastfeeding, and availability of breastfeeding support. In order to improve breastfeeding rates at the FHCW, this study investigated postpartum women’s perceptions of how the FHCW counseled and supported them around breastfeeding. Objectives:This study lays the groundwork for identifying ways in which the Family Health Center of Worcester can improve breastfeeding initiation and duration among its patients. By directly interviewing postpartum women, the study seeks to determine what messages FHCW patients receive about breastfeeding, as well as to assess how the FHCW prepares pregnant and post-partum women for breastfeeding and supports those who choose to breastfeed. Methods:This cross-sectional analysis involved voluntary interviews of postpartum women who came to the FHCW for a previously scheduled appointment during a three-week period in March, 2008. Eligible patients had received all their prenatal and post-partum care through the FHCW and had delivered a live baby within the past 6 months. The surveys were administered, either immediately before or after the patients’ appointments, by a medical student investigator in English or Spanish. Questions addressed participants’ attitudes about breastfeeding, the messages and information they were given about breastfeeding, and their personal experiences with breastfeeding. The study was exempted by the UMass IRB and approved by the FHCW Board. Results: (Preliminary data)Of the fifty-one women who were interviewed, forty-nine were included in the data analysis. The mean age of women who participated in the survey was 25, 53% were born outside the U.S., and 59% identified themselves as Hispanic. Twenty-four of the women had more than one child, and 20 of these women had attempted to breastfeed a previous baby. ¾ of the women interviewed agreed with the statement “breast milk is the best food for babies” while 20% agreed that “formula and breast milk together is the best…”. Women who thought that breast milk is best were the most likely to breastfeed. Fifty-nine percent of women (29 of 49) had made a feeding decision before the end of their first trimester. Women who made a feeding choice either before they got pregnant or in their first or second trimester were more likely to plan on breastfeeding than women who decided during their third trimester or after they left the hospital. Forty-two women (86%) reported that when they left the hospital they had planned to mostly breastfeed, while 7 women (14%) reported that they had planned to mostly formula feed. The most common reasons for choosing formula over breast milk included “I was sick or on medicine”, “I didn’t want to breastfeed in public”, “I went back to work or school”, and “I was worried breastfeeding would be painful”. Of the 42 women who planned to mostly breastfeed, 52% (22 women) were still breastfeeding or pumping breast milk at the time of the interview. Of the women who had stopped, 4 (10%) stopped within the first 2 weeks post-partum, 9 (21%) had stopped by 4 weeks, and 14 (33%) had stopped by 6 weeks. The most common reasons to stop included “I did not produce enough milk”, “Breast milk alone did not satisfy my baby”, “My baby had difficulty nursing”, “I had trouble breastfeeding”, and “My milk dried up”. When asked how well the FHCW prepared breastfeeding women for the challenges of breastfeeding, 66% of women (27 of 40) rated the FHCW either “well” or “very well”. When asked about their experience in the hospital where their baby was born, 55% of women (23 of 42) reported that staff had encouraged them to supplement their breast milk with formula. Upon discharge, greater than 90% (38 of 42) felt confident that they would have the breastfeeding support that they needed. Women were asked whether they remembered anyone telling them particular facts about infant feeding. Fifteen women (33%) remembered being told that “giving a baby formula can affect how much milk a breastfeeding woman makes”, 22 (50%) remembered “some women have pain or get infections with breastfeeding”, and 18 (41%) remembered “breastfeeding can reduce a woman’s risk of some cancers”. Discussion:The results of this study support that women are deciding whether or not to attempt breastfeeding very early in their pregnancies, and that those who decide earlier are more likely to breastfeed. Such early decisions highlight the importance of counseling women early in their pregnancies (or pre-conception) about the benefits of breastfeeding. The large number of women who stopped breastfeeding within the first 6 weeks post-partum is representative of trends nationwide. Such results support the need for improved interventions for breastfeeding women during the first few weeks post-partum. In particular, since many women stopped because of concerns about their milk supply or breastfeeding technique, these results suggest that breastfeeding women should receive more counseling around these specific issues. The data suggest that patients did not remember being told some of the benefits, challenges, and facts of breastfeeding. Since our study was based on participant recall, we cannot distinguish between providers not giving this information to pregnant women, the women not understanding this information, or women not recalling that they were ever told this information. Our study is limited by its small sample size and not knowing for how long the “still breastfeeding” women would continue to breastfeed. Conclusion:These results suggest that women who receive care through the FHCW are making decisions about whether or not to breastfeed early in their pregnancies, and that there is a significant breastfeeding attrition rate in the first few weeks post-partum. This study lays the groundwork for future studies that will help the FHCW identify ways to improve breastfeeding initiation and duration among its patient population.

The author participated in this study as a medical student in the Senior Scholars research program at the University of Massachusetts Medical School.

Copyright the Author(s). All rights reserved.